Home is truly where one’s heart lies. We, at Iswar Sankalpa, relentlessly try to locate our clients’ homes from the moment they share some information about their families. Sometimes, we are provided with the complete address and the family is only a phone call away while other times we have to decipher cryptic and vague information related to a temple, a river, a railway station, or about a nearby factory. Linkages with key stakeholders (police stations, hospitals, colleges etc.) support the process.

We believe that the family and the client often need to be prepared to live with one another after years of separation. Thus, the team provides Psychoeducation to the family and After-care to ensure sustainable restoration; periodic follow up phone calls, home visits, and hospital linkages are made to secure clients’ care network.

Children meet their parents again, old parents meet their children again, husbands meet their wives – the reunion is always a special story about love and longing. 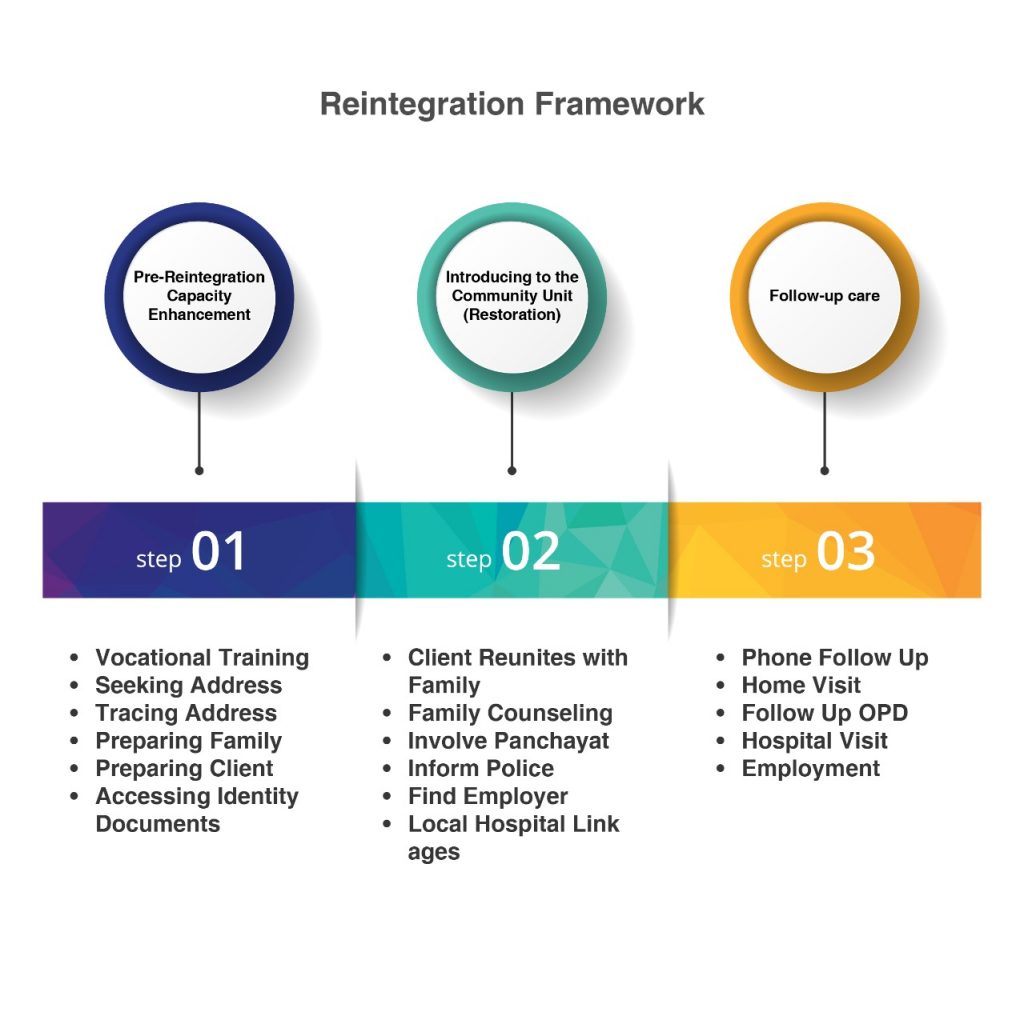 Persons restored back across India

Geographical Distribution of Clients Reunited with their Families

A major break-through for the team was to restore a client named Brindan in her late 40’s to her home in Punjab after a span of 8 years. Brindan was brought in by the local community members to the Sarbari shelter in 2012.

She was from Punjab and was married with three children; and her husband had a tailoring business. She had increasingly become isolated from her significant other, as she was deemed to be a not good enough daughter in law. She encountered squabbling, mockery, and a wide range of abuse which lastly led her to separate from her in laws, and come back to her maternal family. Gradually she began to believe that she is goddess ‘Baishno Devi’ and on Earth for human welfare. Consequently, she ended up on a train, and landed up in Kolkata.

Brindan was diagnosed with psychosis – Her speech was irrelevant and she also had difficulties trusting anyone. The multidisciplinary team started working with her. Shortly after, she shared that she can do sewing, and joined the vocational unit in 2013. Slowly and steadily, she started participating in the shelter activities- she especially enjoyed dance movement therapy and functional literacy classes.

As time passed, she started getting very good at making bags, but her auditory hallucinations were still persistent. There was a longing, an unfulfilled wish to see her family and to be with them. She continued working, while at the same time conversing with her family in her own reality.

Towards the end of 2014, the team was able to trace her family. Even though they were not onboard with having Brindan back with them immediately, they kept in touch. family.  By 2017, the family refused to commit as to when they would take her back, and Brindan suffered a breakdown as a result of this. She became detached and discouraged. She was unsure about her future, and it was difficult for her to keep hope.

Around the time Brindan came to Sarbari, her husband and in-laws passed away. Her sons had grown up, and were working. In 2019, one of her children reached out to the team again, and wanted to talk about getting his mother back and kept in touch through regular video call conferences.

Finally after a long process of negotiation, in March 2020, Brindan went back home to her sons. She even brought a sewing machine from the money she earned through the vocational unit. When the sons met her, they realized what was missing in their lives. Every day, they would work and eat outside and would just come back at night to go to bed. But now, there’s a mother who waits for her sons to come back home, so that they can eat a meal together as a family and talk about their day. She is very happy to have gone back home, after a span of 8 years. Her sons are taking care of her medication and she will continue to embark on the sewing journey which she started here in Iswar Sankalpa.

See All Programmes
Support This Programme